Despite my good intentions at the start of the year, I haven’t had nearly enough time to write and when I have sat down, I’ve struggled with writer’s block. I’ve only added 5000 words to the 50,000 I wrote during Nanowrimo and for once, the strategy to just write and let the words flow hasn’t worked.

I was feeling frustrated that I had lost my novel writing mojo. Part of the problem was the fact I just didn’t know where my novel was up to. I’d half plotted the novel out in Scrivener, and then during Nanowrimo worked on particular scenes, so when I came back to it months later, I wasn’t sure where to start.

I might have continued to flounder had it not been for the push to enter a couple of really exciting writing competitions for beginners. This was just the incentive I needed to re-focus on my writing – but I wasn’t sure how to do it.

As we were packing for a two-week, 5000km road trip last month, I decided to print out the 190 pages of my manuscript and start editing. Now, I should say now, as someone who 12 months ago didn’t think she could write a novel, I feel like a fraud describing what I have written as a manuscript – but, that is what it is – even if it is a work in progress.

Turns out that printing out these pages, and picking up a pen has had a really positive effect. Editing the words I’d written, I rediscovered my writing mojo and I rediscovered my enthusiasm and excitement for the story I am trying to tell. There were definitely moments of “this is rubbish” but these were outweighed by moments of “I love this story and I want to finish it”.

I probably shouldn’t have been surprised that is was easier to edit this way because I have always been a “pen to paper” editor. But the other thing I found was having the pile of papers that make up this very rough first draft sitting beside me in the car or beside my bed, has prompted me to pick it up to read, edit and write – even if I only had 5 or 10 minutes to focus on it.

I might have deleted more words than I have added but I have realised that is not a problem. While Nanowrimo is great for setting up a good writing discipline and for getting the bones of a story down, it does set up some slightly unrealistic expectations about how much you can write. I’ve learned in the last few weeks that it is just as important to delete the words that don’t add to your story as it is to add words.

While I only got through about 50 or 60 pages, just having those physical pages around has helped me think more about my book in the last few weeks than I have since Nanowrimo. I have had more ideas about how to structure my story better, and I’ve plotted out the story. I feel like I have become engaged in my story all over again, I know where I can take it and it’s so exciting.

Early on in the year, I’d set some lofty goals to enter a couple of competitions that required a completed manuscript, and that certainly did help with the feeling of being overwhelmed. So I have dialled things back and am now working on refining just the first few chapters for a couple of competitions really aimed at beginners. This is just the push I needed, and it’s been great to realise that sometimes, going back to the basics is really all you need.

In the last couple of months, while I’ve been very quiet on this blog, I have actually been doing a lot of writing – and next month, I’m about to do a lot more. 50,000 words more in fact.

After thinking about it for a long time, in September I finally signed up for the Australian Writers Centre Magazine and Newspaper writing course. I had been thinking about doing this ever since the blog post about the photo-shopped school photos went viral and I saw large chunks of my blog post being reproduced. I decided that if I was going to write, perhaps I could get paid for it.

The five-week online course equipped me a lot of useful information and tools, including how to pitch articles, how to structure an article, how to analyse a publication and how to interview. It was delivered via audio each week, with a weekly task which was shared in an online classroom and for which we received feedback. I really enjoyed interviewing a classmate and writing a profile. Completing each of the weekly exercises meant that by the end of the course, I almost had a complete article and pitch ready to use. Most importantly, the course gave me the confidence to give freelance writing a go.

A week after the course ended, I pitched my first story. I decided I was going to participate in the Runaway Barossa half-marathon that I had entered back in June, despite having spent the winter injured or sick. The day before the race, I decided to pitch the story to the local paper and set myself a somewhat unreasonable deadline of providing an article “on-spec” by Monday morning. The editor came back to me and said that while there was unlikely to be space in the weekly print version of the paper, they could run it online.

I survived the 21km, which started with a 4km jog, moved to a jog/walk,  a walk and finally a stagger towards the finish line (and Riesling). After spending Sunday in Adelaide,  I left my story to the last minute (something I will not be making a habit of) and spent Monday morning frantically putting something together. Within an hour of providing it to the editor, it was shared online and while I was disappointed in the lack of proof reading and by the fact I hadn’t pushed for payment, it was still a good experience. I was feeling bad that I had worked for free until a number of people who had graduated from the course said this was still good experience as long as I was clear about why and when I would work for free.

While I have a couple of ideas about features I would like to write, my next step is to speak to a couple of editors and see where there is scope for paid work. One of the big lessons I have learned that unlike blogging, feature writing is not about my opinion and in fact, the trick is to keep yourself out of it.

Launching a freelance writing side-career would probably be enough to keep me going for the rest of the year, but NaNoWriMo starts tomorrow and I am giving it another go. The National Novel Writing Month (which started in the US and is now international) is a month long “competition” with the aim of writing 50,000 words. I lasted a day in 2014 (which probably had something to do with trying to write fiction on the barest of outlines) and got about 10,000 words done last year before moving in and setting up our house took over.

I had initially planned to start a novel/memoir of Dad’s life but given the interviews and research it will require, I have instead decided to try a work of fiction. I’m going to have a go at writing the sort of family/inter generational saga/romance that I’ve enjoyed since I first read the Thornbirds as a teenager. Tentatively titled “Budburst”, it will be set here in the Barossa and I’m hoping to weave some historical stories alongside a modern story. I’ve been having a lot of fun plotting it out and I’m making the most of free access to the Scrivener writing app to draw up a rough outline of the chapters. I’ve also been doing lots of research about local history although once Wednesday rolls around, my aim will be to write 1667 words every day and finish the month with a basic story – and a long list of questions to follow up. 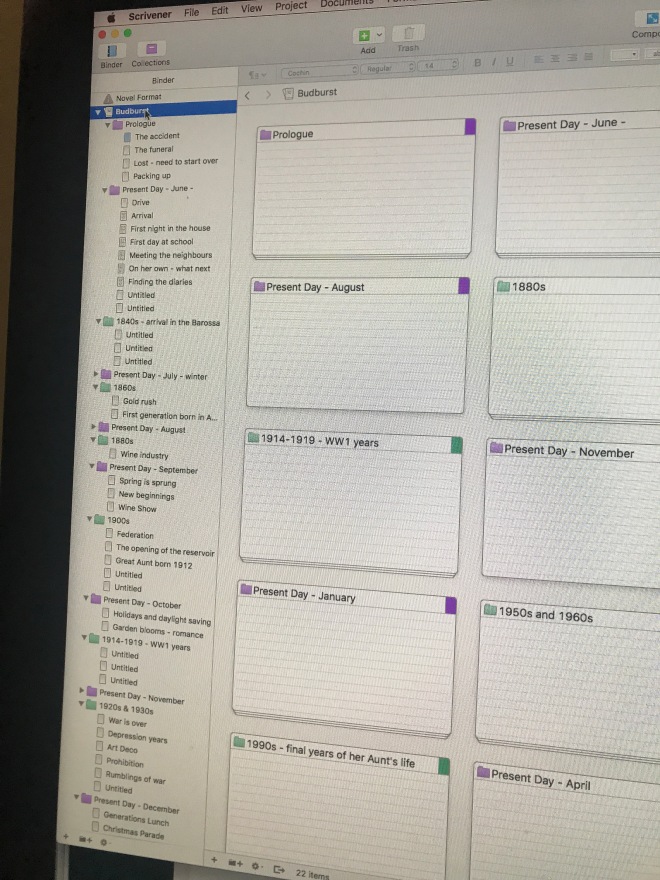 I have a few friends who have done it in the past, including my friend Emma, who wrote her novel Unrequited (published by Harper Collins and is being performed as a musical in Canberra this week) during NaNoWriMo a couple of years ago. I went along to the Adelaide kick-off party for NaNoWriMo and have also connected with a few other people I’ve met through a couple of podcast groups,  that are planning to do it – so hopefully we’ll be able to keep each other motivated.

Given how long it has take me to write this post, I can’t promise I’ll be blogging in November, but at the same time, once I’m back in the daily habit of writing, knocking out a quick blog post might actually be welcome relief from working on my manuscript. After surving that half-marathin, I’m feeling like anything is possible!